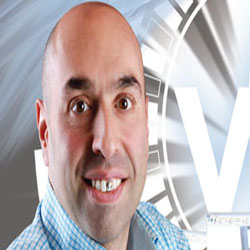 Chahe Bakmazjian, Founder and President Over 1.5 million robots are estimated to be in operation in industrial applications worldwide and around 160,000 robots designed for various activities are sold every year. Though the sales of robots are reaching unprecedented heights, manufacturers and designers using these machines are still struggling to exploit their full potential due to the lack of mature, time and cost-effective robot programming solutions.

Meanwhile, advanced robotics is also evolving at a faster pace. CIOs are adapting new automation tools and programs to stay abreast with the technological advancements. “But an advanced robotic machine is only as good as the program it runs on,” says Chahe Bakmazjian, a determined mechanical engineer who wants to help manufacturers interact with their robots in a more flexible manner. Having identified that robots are going to play a large part in manufacturing and a new breed of software is going to power them, Bakmazjian founded an industrial automation company, Jabez Technologies in 1996.

Robots Need a Better ‘Life’ too

In 2001 Jabez Technologies took special interest in the challenge of using CAD/CAM software to program robots and created the prototype of CAD/CAM software for robotics, ‘Robotmaster’. “Traditional CNC machines did not serve the purpose for manufacturers as emerging trends required a more efficient, cost effective and flexible process of developing a prototype or manufacturing an end product,” says Bakmazjian. Jabez Technologies solves this problem by integrating robot programming software with CAD/CAM technologies, which allows easy adoption of robots. “The goal was clear; we wanted robots to interact with all kinds of apps that were once not served adequately, and we have been successful in achieving it,” he adds.

Robotmaster was first implemented in 2002 to convert Mastercam’s CAD/CAM paths to robot programs. Realizing that the demand for simple and effective robot programming was going to be a large part of the new type of manufacturing propelled by globalization, flexible manufacturing and off-shore competition, Jabez further coined a term called ‘CAD/CAM for Robots’ in 2005. “What differentiates Robotmaster from classic off-line programming is that robot paths are calculated automatically and no point-by-point intervention is required. Robot errors and limitations are identified and fixed automatically. Tasks that would require meticulous and skilled intervention can now be successfully programmed in minutes by a newbie to robotics using Robotmaster,” adds Bakmazjian.

With the successful implementation of CAD/CAM, Jabez Technologies has elevated the performance of the robotics industry, defying statements of a ‘school of thought’ that once commented— “CAD/CAM integration for robotics is impossible.”
The company’s end to end CAD/CAM solution for robotics allowed manufacturers to seamlessly interact with robots through a new intuitive interface; proving all such notions wrong.

While robot manufacturers have developed stiffer and more precise robots optimized for machine tooling applications, industry adoption is slowed by the lack of adequate programming tools for complex trajectory programming. Existing methods are too complex, time consuming and labor intensive to be practical in todays high mix, low volume production environment. Robotmaster integrates into the CAD/CAM based CNC programming environment, and programming the robot trajectory is done graphically to produce error-free 6+ axis robot tool paths in hours instead of the days required by conventional methods thus helping clients save time and money.

“The real technological leap was designing a product that was easy and intuitive for a novice user as well as offering all the power that an expert programmer expects. Moreover intricate analysis was required to provide instant visual feedback and to optimize the efficiency of our kinematic calculations; as well as developing a state-of-the-art collision checking library that is faster than the fastest available commercial libraries,” says Bakmazjian. A key factor to JabezTechnologies’ ability to innovate was building a team that is knowledgeable in both CAD/CAM software development and robotics. The company’s research and development team is led by Dr. Waseem Khan, Director of Technology. “Dr. Khan’s leadership approach, through nurturing a great team culture, has consistently produced out-of-the-box thinking and innovative results,” affirms Bakmazjian.

“There is a trend in companies to scrutinize large capital investment for machines and to explore cheaper and more flexible manufacturing solutions. A $600,000 worth CNC machine that may be capitalized for over 10 years, will pose many uncertainties due to constant shift of technology trends. Hence, customers are looking for shortterm investments to get a quicker return on investment and robots are in high consideration, being more flexible in terms of technology,” adds Bakmazjian.

Jabez Technologies has helped many companies, including those in the construction and fabrication sector, who were looking to adopt robots for various applications like cutting and welding; and also automotive companies whose issues pertained to trimming thermoformed products, laser cutting and water jet cutting. The company has facilitated robotization to Aerospace companies like Boeing, EADS (Airbus) and Embraer, to help manufacture aircraft skins and perform other tasks like trimming, drilling and riveting. Jabez also has expertise in aircraft engine components, which needs deburring, sanding, grinding, polishing and to carry out thermal projection using robots.

To highlight a case study, a leading aircraft manufacturer was looking to start a new project that involved manufacturing parts for a new series of planes.
The company needed increased process flexibility and a reduction in cost for manufacturing aircraft skin components. Afterlooking at expensive CNC machines, this aircraft manufacturer approached a German robot systems integrator called KUKA Systems and together with Jabez Technology’s CAD/CAMsoftware integration, they successfully implemented a robotic solution. The company attained their objective along with gaining significant manufacturing flexibility and added benefit of cost savings.

Jabez Technologies’ latest software version introduced RISE (Robotmaster Interactive Simulations Environment) that provides a unique integration of user control, speed and flexibility to Robotmaster’s renowned automation and optimization tools. The company is continuing to enhance this new and exciting platform by developing the next version of their software called Robotmaster V7. “Our goal is to create another mini-revolution in robot programming with Robotmaster V7,” says a thrilled Bakmazjian. Robotmaster V7 will have features that will help manufacturers operate and program robots by exploiting their full potential using intuitive software tools. The one feature that is expected to stand out is automated optimization of potentially complex tasks like collision-free transitions between operations and error-free programs.

With the continued move towards high-mix low-batch type manufacturing, where the emphasis is more towards mass customization than mass automation, industries are expected to support and enhance the use of robots in their operations. Towards this Jabez Technologies continues to build intuitive and easy-to-use robot programming softwares that are suitable for customers who have little or no expertise in robotics. “Our ultimate goal is to one day create the ultimate software interface, which optimizes the programming of a robotic task based on a few intuitive parameters to enable automatic robot programming. This is useful for end-users who are process experts than programming experts,” says Bakmazjian. Meanwhile, Bakmazjian is busy with his group of researchers, developers and engineers—enhancing and creating strategic alliances, ensuring proper working of the development channel, product and technology direction, and bridging the connection between Jabez Technologies and major players in the robot manufacturing business— to uplift the company’s stand on the global edge.

Many implied that robots are difficult to program with CAD/CAM software, but it only intrigued our interest and passion in unveiling neverbefore- attempted possibilities 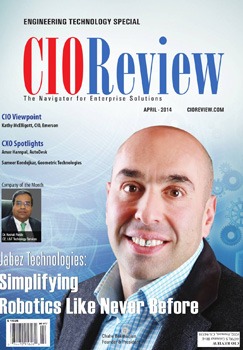